Ready-to-build land plots for the construction of industrial SPS

I would like to talk about energy saving systems as a tool for maneuvering the objects of the RES. We understand that the topic is gaining relevance with each month, is discussed for a long time, but there is no noticeable progress. And we must do so if we support the global trend toward green energy. At the same time, there seems to be no clear understanding of who should act as the locomotive for change and move from slogans to concrete actions.

Today, in many countries with a level of energy production from RES in times higher than in Ukraine, the accumulation capacities of so smart Grid systems are successfully operating. The world experience in this direction is considerable, it should be studied and applied in Ukraine without trying to invent a bicycle.

It would seem that everything has long been invented, just take and do. Why are neither companies nor the state doing this?

From my point of view, the issue is money. For example, we are constantly talking about the fact that tens of billions of hryvnias per year are needed for the reconstruction of roads within ten years. And this is only to bring them to a more or less normal state. Such figures are no surprise to anyone. Why, then, doesn’t anyone say that a few billion dollars each year should be allocated for normal, “healthy” energy for a few years, too? And then we have a chance to get a modern, highly-maneuverable, very convenient power system, which will be guaranteed to supply all consumers with high-quality electricity, regardless of where they live in the country.

As for business, he is not actively engaged in the development of maneuverable capacities because of weak motivation on the part of the state and lack of economic prerequisites. For example, as the owner of several SPS, I do not see the economic basis for such decisions. It will appear in two cases: (1) in the case of very large fines for non-balance and (2) in the case of restrictions on the periods of the day for the issuance of my generation without compensation.

Then it can cause me, for example, to accumulate energy during the day and to give it to the power system at night. Until both of the above factors are critical for business, no money will be invested in this. And the reason is simple: For an investor, any extra investment shifts the payback period, and it is not known whether they will be economically sound.

To be sure, generating companies can be maneuverable. This is a question from the field of management of alternative energy facilities: What share of generation should be given to the network, and what – to accumulate. Drives must be managed by smart Smart Grid systems that predict and link weather, traditional energy sources, and collect solar and wind data sets. All this is analyzed and decisions made.

But now, in the field of maneuverability, the ball is on the side of the state. The state creates the rules of the game on the market. We, business, worked and worked under these rules. It was the state that provided an incentive to develop the green energy industry. The stimulus is very right, I do not argue. But now it is strange to hear the claims that, he said, they have adjusted a lot and what, they say, now with all these capacities to do. What did we do wrong?

Instead of voicing the beautiful slogans of “we need to implement smart Grid” or “we lack 2 GW of high-power capacity”, the state should write a specific “road map” in the existing energy strategy and develop a program. What is the question? When the business saw economic attractiveness, it built 2 GW per year only in the sun – we see it well. The state, which is interested in introducing these accumulative capacities, will find both an economic basis and an investor.

In a year or two, this can be done, which will allow alternative and traditional energy to move on. This applies to both “sunflowers” and “winders” – one can and should act together. Even if I commit business to construction of large objects of the RES to provide a certain percentage of accumulation capacities, – there are no problems, I am ready to participate in it. In fact, it will be much more effective to do this together by business efforts within the framework of a single state program. For example, installing large capacity in several regions of the country will be more accurately profitable than each manufacturer individually mounting them on their SPS or WPS. And that will significantly reduce capital spending on construction. Be sure that the business will support this idea and will be willing to participate in a share if it is well and clearly submitted.

Moreover, I believe that the conditions for accession and cost already allow the state to accumulate funds and invest in accumulation and maneuvering. The state, after all, raised the bar very high on accession. Examples do not need to be far away: In the same Poland, the cost of joining is five times lower than in us (we have 50,000 euros / MW, there are 10,000 euros / MW). As a builder, I argue that we have a very high price. Even given the deterioration of our electricity networks, this should cost a maximum of half of the reported amount. This is one of the sources of financing of maneuverable capacities. We will multiply 25,000 euros by 2000 required for storage of megawatts – we will get €50 million This money can be built from 100 to 200 megawatts of storage capacity, or 10% of the amount we need. And these funds can be taken out of the market right now, and they will not affect it in any way. Imagine what you can achieve if you develop a competent program.

It is beneficial for the state to create balancing capacities on all sides, since they will provide more flexible operation of the energy system. The “Green” tariff, after all, will gradually decrease. Yes, it is necessary to withstand this financial burden for ten years, and then the state will have and manage a huge number of diversified sources of electricity with absolutely market price. It is important to understand: Either the state subsidizes investors (by raising EBRD funds, for example) and they develop these capacities, or they will be forced to create these capacities on their own. There simply is no other way.

My opinion: The most effective solution for our country will be the balance between hydropower and creation of new maneuverable capacities on the basis of batteries. The future is definitely behind storage, because the sun and wind can only be balanced in this way. In view of the fact that we in Ukraine have good hydropower, it also needs to be developed, to strengthen the hydroelectric power stations, and at the expense of this to participate in balancing.

I am sure that today both Ukrenergo and Minecenergo are really aware of the country’s needs for creating maneuverable capacities, and have acquired primary experience, faced with problems in practice. Already, they are far more competent than they were three or five years ago to make adequate market-based decisions.

The question is just how civilized this will be decided. – власник і директор ЕДС Олександр Запишний“ 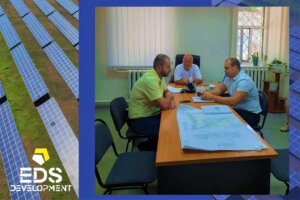 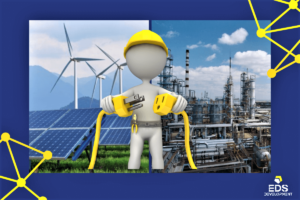 Own electricity for business

The energy crisis in Ukraine is technical in nature - gradually, as auctions are introduced, quotas are bought for the new generation, the market will start moving forward again.